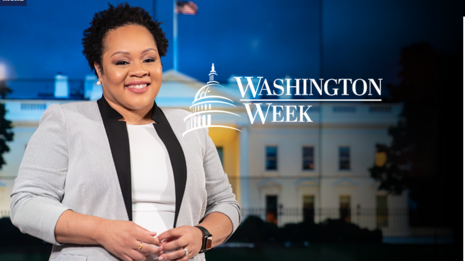 PBS White House correspondent Yamiche Alcindor gets second job – as host of Friday night journalists’ roundtable Washington Week. The New York Times call it “A calm redoubt on the screaming battlefield of political television”. It is because it is a table full of Liberals. Think of it as the liberal counterpart of The editorial report of the journal on Fox News.

Sharon Percy Rockefeller, wife of former Senator Jay Rockefeller, is the CEO of WETA, the Washington PBS superstation that produces the show. She made a statement.

“One of the most respected voices in journalism today, Yamiche is known for her mastery of public policy issues and her intrepid work as a member of the White House press corps. With calm and tenacity, she has covered some of the most important political stories of our time, consistently demonstrating the highest standards of journalism.

“Intrepid” and “tenacious” are currently not in vogue in the White House. At Biden’s first White House press conference, Alcindor sort of questioned the border crisis by proclaiming “the perception of you that got you elected. moral and decent man is the reason why many immigrants come to this country and trust you with unaccompanied minors. “

This is separate from his regular appearances on MSNBC, like his gush last November when Biden won: “I was talking to a Democrat who just said it looks like the Avengers too, it felt like we were saved from that, from this madness that we’ve all been through for the past four years and now here are the superheroes to come and save us all.

Alcindor is the second black woman to host the show. Gwen Ifill held this post from 1999 until her death in 2016. She told the New York Times “” Much of what has guided my journalism is: how are vulnerable populations affected by these policies? This will be my common thread.

Alcindor was known for his angry feuds with President Trump. In August 2019, at a press conference at the G7 summit in France, Alcindor became emotional with Trump when he spoke about Russia’s annexation of Crimea in 2014. She said: “Why continue- you are using the misleading statement that Russia has outsmarted President Obama … Why keep repeating what some people would consider to be a clear lie? ” Russia invaded and captured Crimea, and Obama did nothing to stop it.

Then she continued PBS NewsHour and complained about Trump, saying, “He also reiterated his flawed claim that Russia was kicked out of the group because Russia defeated former President Barack Obama.” At the time, former White House Secretary to President George W. Bush Ari Fleischer insisted, “The fact that neither she, nor apparently the rest of the White House press, thought her question was out of the question. about, and an example of bias, shows just how deep the bias is. “

This is how you climb the ladder of success in the liberal media – a lot of liberal “tenacity” on the right targets.