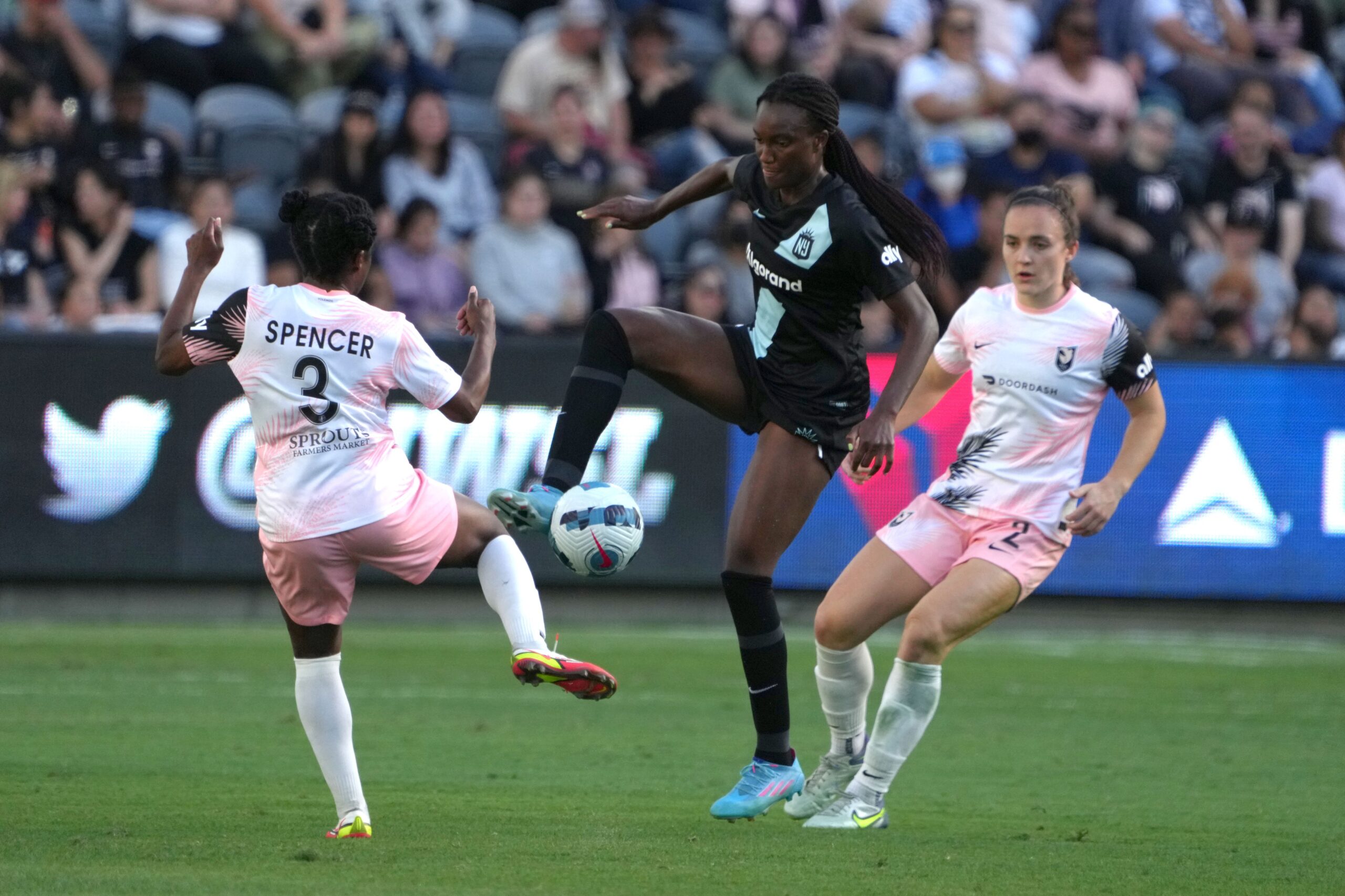 Sunday featured three National Women’s Soccer League matches. OL Reign defeated San Diego Wave FC in the Cooler Clásico in Seattle, while NJ / NY Gotham FC was out of a road win over Angel City FC in the first meeting between the two clubs. The Houston Dash and North Carolina Courage split the points in the day’s other match. Scroll for full details and analysis.

The Skinny: Gotham FC rode a second-half goal from Ifeoma Onumonu to a 1-0 win over Angel City FC at the Banc of California Stadium. The win was the first for Gotham since opening night and Angel City saw a two-match win streak snapped.

The goal came about after Caprice Dydasco crossed one in from the right side and it bounced free in the box. Midge Purce and Vanessa Gilles came together, and the ball bounced into the path of Onumonu, who beat DiDi Haracic to the near post. The win for Gotham came against former head coach Freya Coombe, who took the Angel City job in the middle of Gotham’s 2021 season and exited the club soon thereafter, making way for current coach Scott Parkinson.

One Key Moment: On a night Ashlyn Harris became the first goalkeeper to 500 career regular-season saves, her diving denial of World Cup teammate Christen Press in the 80th minute preserved the clean sheet and the victory for Gotham. Press had circled around McCall Zerboni to receive a pass from Savannah McCaskill and unloaded a shot from just outside the 18-yard box. Harris dove to her right and saved it off the post. Jun Endo swooped in and looked like she might finish the rebound but did not make clean contact. Angel City had several chances after that on scrambles in the box but did not have any more chances nearly as strong.

Inside the Game: Most of the game stats belied the final score with Angel City having an edge in nearly every category besides the final score. They outshot their guests 24-7 and completed 75.7% of their passes to Gotham’s 67.1% while attempting nearly 60 more. The early tactic of trying to isolate Press on Ali Krieger reaped every benefit besides a goal on the board. Angel City continued to push throughout the 90 minutes with Endo and Clarisse Le Bihan showing their mettle in midfield, but it was one of those nights where it seemed no matter what they tried, there was not going to be a goal to be had.

The Skinny: OL Reign put on a dominating performance once again, this time against expansion side San Diego. The Reign created lots of high-quality chances and managed to put one away to take all three points. Somewhat stealing the show, during halftime, OL Reign’s general manager announced that Scotland and Reign legend Kim Little will be returning to the club on June 1.

One Key Moment: Another slim, one-goal win for the Reign makes this game-winning goal an easy choice. Sofia Huerta continues to be one of the best set-pieces assist providers in the NWSL and Rose Lavelle scoring with her head, very unusually for her, is indicative of how good the service was.

Inside the Game: Despite not controlling possession, OL Reign dominated this match. Creating 14 chances with a total xG (expected goals) of 1.81, according to the StatsPerform model, compared to just 0.31 for San Diego. Certainly, the PNW side wants to put away more of the chances they are creating, but head coach Laura Harvey is happy about the sheer number of chances they are creating, thinks the finishing will continue to come, and at least the chances are turning into victories.

The strong defense of Alana Cook, Sam Hiatt, and Huerta was also on display as they shut down the league’s current leading goalscorer in Alex Morgan, only allowing one shot from the veteran forward, as well as forcing her to play a lot of defense. The backline and Phallon Tullis-Joyce earned their fourth clean sheet in a row as a result.

Reign’s high pressure also caused problems for the Wave, not allowing the Wave midfield to influence the game at all. In this match, midfielder Jess Fishlock became the first non-American to reach 150 regular-season NWSL appearances. Announcing that Kim Little will be added to this stacked team’s midfield should be a terrifying prospect for their opponents.

The Skinny: Houston remains unbeaten in four straight games after a season-opening loss, while the Courage picked up their first point of the regular season.

One Key Moment: Rachel Daly’s goal came in her 100th appearance for the club – and it was an important one. Sophie Schmidt won the ball deep in her own half, then found Nichelle Prince, who beat Abby Erceg on the dribble and played the through ball to Daly, who held her run perfectly. The goal came six minutes into stoppage time after Kelcie Hedge went down with an injury at the 45-minute mark.

Inside the Game: Houston returned to its traditional back-four a week after rolling out a surprising three-back in Portland to defeat the Thorns. Acting Dash head coach Sarah Lowden said postgame that those tactics were always the plan for these two games back to back.

Houston found success frequently in wide channels, with Prince getting in behind on the right side as Courage left back Carson Pickett pushed high, and Maria Sanchez roaming the left side while also taking on some deeper defensive duties to help Allysha Chapman.

North Carolina’s narrow shape is a norm, but in Houston on Sunday, it failed to produce much from the run of play. Diana Ordonez scored in the 24th minute on a brilliant individual effort, but the Courage otherwise struggled to produce much in front of goal. Emily Gray returned from injury to pair with Debinha in the double-10 role, but the Courage are sorely missing Kerolin, who has been out since the Challenge Cup final on May 7, when she was on the receiving end of a horrible tackle.