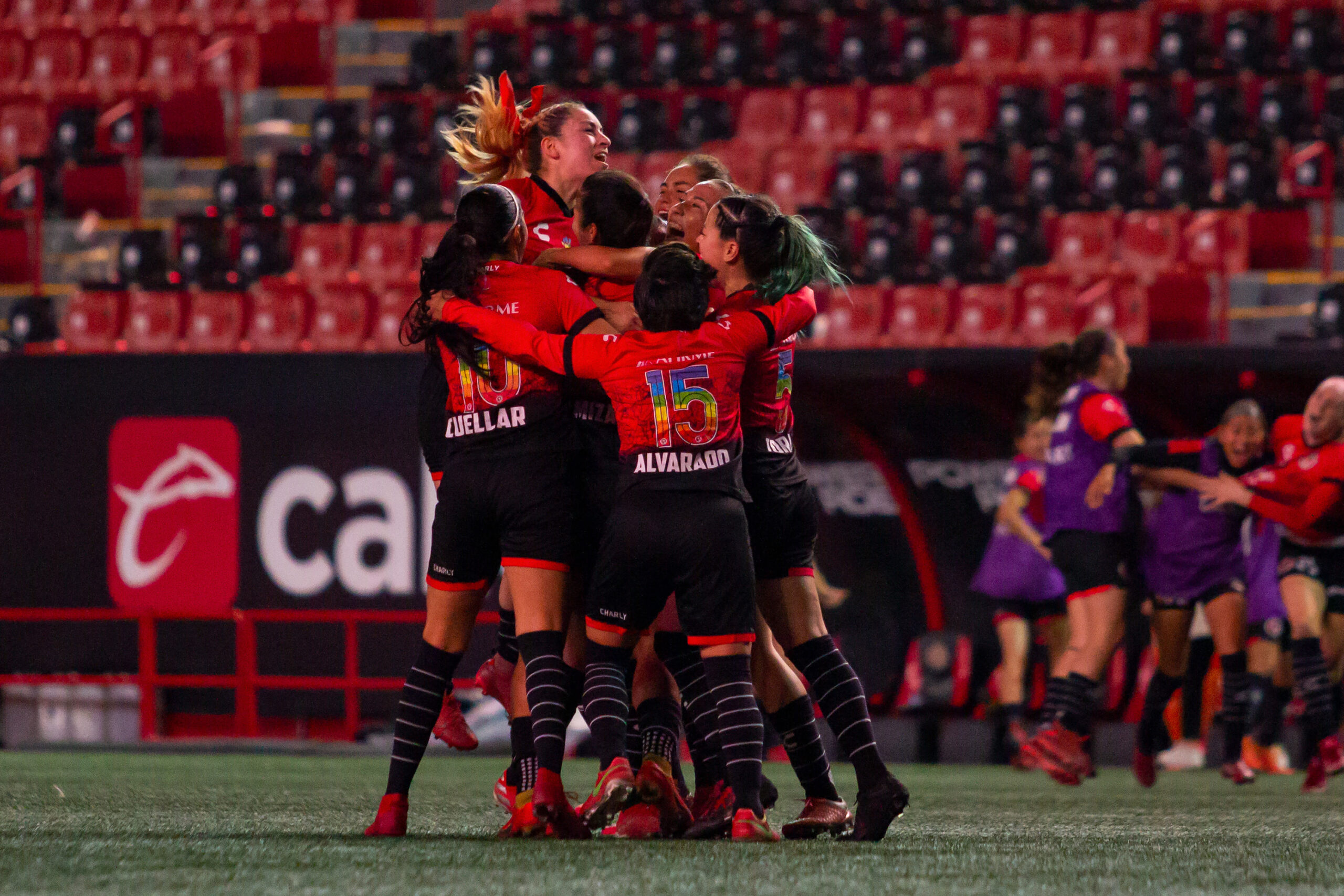 Talk about chaos. The final week of Liga MX Femenil action certainly delivered on all of the different playoff scenarios and the chaos that followed. Atlético San Luis, Querétaro, Cruz Azul, Club Tijuana, Toluca and UNAM Pumas were all competing for the final two playoff spots.

In the end, Pumas and Tijuana took the final two spots, in seventh and eighth place respectively. We’re going to look at what happened in those key matches in chronological order so you can get a feel of how many times the table changed this weekend.

A moment of celebration occurred when Atlético San Luis – the team with the slimmest chance to make the playoffs – defeated Querétaro at home. That celebration was short lived, thanks to Cruz Azul, but the victory was still a moment of pure joy for the club. San Luis finished on the table in 11th place, one of their better finishes in Liga MX Femenil history.

Isabel Kasis scored in the 16th minute, muscling off her defender and then taking on Gallos goalkeeper Ruth Arana one-on-one and slotting the ball into the net. Querétaro equalized in the 37th minute, courtesy of Daniela Sánchez converting a penalty kick, shooting to the right side of goal.

The second half was San Luis’ show, though. In the 47th minute, Beatriz Parra wasted no time getting a cross off her left foot and watched it skip into the goal, almost in slow motion. Estefania Izaguirre put the bow on for San Luis, chipping goalkeeper Arana while being sandwiched between two defenders.

Despite one of their best finishes, San Luis fired head coach Jesús Padrón. The firing comes after San Luis majorly improved from the fall Apertura season, where they finished in 16th place. No replacement has been named.

Despite the strong comeback from San Luis, the table shifted when Cruz Azul took three points at home against Puebla, putting them in a playoff spot for a short period of time. Four goal scorers made up the score sheet, as Cruz Azul gifted Puebla one own goal.

Magaly Cortés didn’t waste any time to get Cruz Azul on the board, slotting home a slanted-angle shot past Puebla goalkeeper Brissa Rangel, after finding herself wide open on the right side of the pitch. However, just two minutes later, Cruz Azul was in a scare as Edith Carmona scored an own goal off a corner kick, heading the ball into her net.

Cortés fixed her teammate’s error with her second goal of the match in the 14th minute with a header past Rangel. Ana Huerta added a third and final goal in the 77th minute, firing a shot inside the box after a picture-perfect layoff from teammate Itzel Cruz – who could have very well taken the shot herself.

Cruz Azul found themselves in a playoff spot, but were still awaiting results of Monday matches. That’s when the real shakeup and chaos began in Liga MX Femenil.

Goals were scattered all over the place in this match. The Monday games came down to the wire. Not just because they were on Monday, the last day of the regular season, but because game-winning goals were scored in the last few minutes of the matches.

While a loss cannot be blamed on one person, it does not help that one of Pumas’ three goals came from a Toluca own goal. In the 1st minute, Toluca got on the board early, with Diana Guatemala scoring on one of the better team-organized goals of Week 17.

The back-and-forth began in the 33rd minute, when Pumas equalized off a Stephanie Ribeiro penalty conversion. Mariel Román scored the Toluca own goal in the 62nd minute to give Pumas their first lead of the match. Off a corner kick, the ball bounced off Román’s chest and slowly spun into goal. However, Román was the player to score Toluca’s equalizer in the 84th minute, giving herself a reprieve.

UNAM Pumas looked like they were going to settle with a draw, until the 89th minute rolled around. Marylin Díaz, a defender, scored the game-winning goal off a corner kick, that she volleyed to herself and fired past Toluca goalkeeper Sandra Lozano.

Pumas jumped up to the seventh place spot and claimed it with 22 points. No matter what Tijuana did, the 22 points were the highest that any of the six teams could have gotten. Earning a win in a down-to-the-wire Week 17 match is impressive, but add in the fact that Pumas did it on the road, and you’ve got a team brimming with confidence heading into the Liguilla.

Toluca dropped down to ninth place with the result, eliminating them from playoff contention. Suddenly, it all came down to Tijuana facing FC Juárez.

If you didn’t stay up for this one, then you certainly missed a high-stakes match that probably would have raised your blood pressure. Every single goal scored in this late-night contest was scored from the 70th minute on.

The table was simplified for Tijuana. They needed a win and they would be in, as both Xolos and Cruz Azul would finish with 21 points. Luckily for Tijuana, their goal differential was better than Cruz Azul’s. The 3-2 win – with a goal at the death – gave Tijuana the three points needed to qualify for the Liguilla.

FC Juárez, playing with nothing to lose, gave Tijuana a good fight. Going into the match, it was a major question mark what Tijuana would do. A team that had nine draws make up most of their points, Tijuana recently fell last week to bottom-table side Mazatlan. FC Juárez finished the Clausura in last place, but they went out with a bang.

Silvia Elicerio silenced the Tijuana crowd in the 70th minute with the opening goal, chipping the ball up and over Tijuana goalkeeper Alejandra Gutiérrez from about 30 yards out. In the 79th minute, Renae Cuéllar scored the equalizer off a free kick that potentially hit a FC Juárez boot, but went in goal and was credited to Cuéllar.

Paola González briefly re-took the lead with a goal in the 87th minute, while Sanjuana Muñoz brought forth another Tijuana equalizer in the 88th minute. The final and game-winning goal went to Xolos midfielder Esmeralda Verdugo, who scored in the 101th minute (after the referee initially only called for seven minutes of stoppage time). A free kick from Verdugo went over everyone’s heads and to the far post, with Juárez goalkeeper Christina Holguin extending but failing to get a hand on it.

It’s the most Tijuana-esque way that this team could have qualified for the playoffs. Of course, there will be conversations about the stoppage time and how Tijuana got an extra four minutes. However, the team that has been the biggest wild card of the Clausura is in – and their playoff match is a good one.

* All Times in Eastern Time. Games will air on VIX streaming.

**Reminder! There are two legs in the Liga MX Femenil Liguilla!

Thursday, May 5: Pachuca Vs. Club America at 7 PM

Friday, May 6: Club Tijuana vs. CF Monterrey at 9 PM

Monday, May 9: CF Monterrey vs. Tijuana Club at 9 PM

Let us know in the comments who you think will win the Liga MX Femenil Clausura trophy! On Thursday, we will have a full team-by-team preview of all eight teams and their chances.