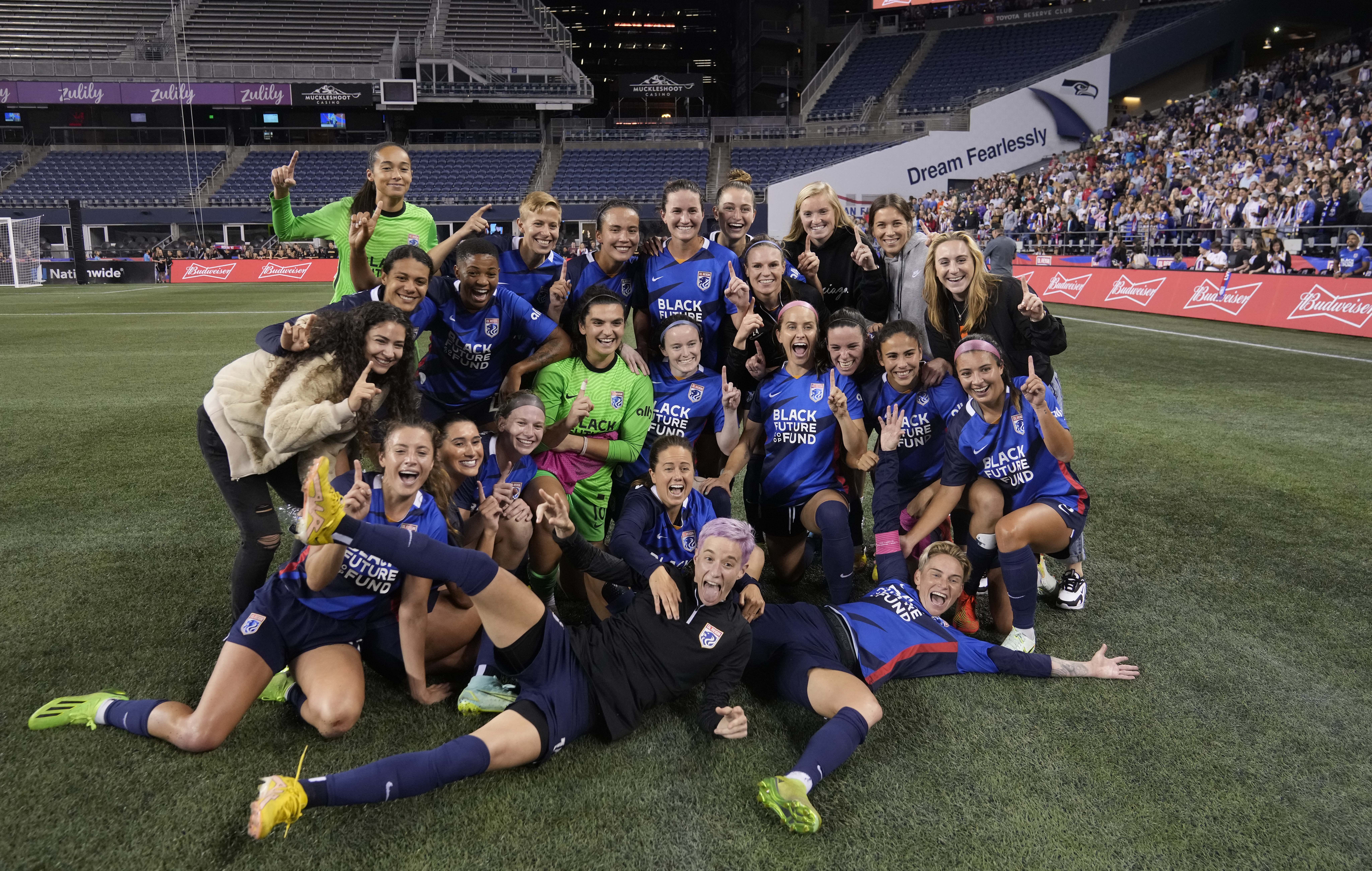 The National Women’s Soccer League featured four matches on Saturday night that played out in dramatic fashion. An early draw at Gotham opened up the chances for a team other than the Portland Thorns to clinch the shield, the Houston Dash then helped themselves up the table to be able to host a playoff match after a late Racing Louisville goal defeated the Kansas City Current . All leading up to the nightcap in Seattle that saw OL Reign win the NWSL Shield for the first time since 2015.

The Skinny: OL Reign came out in this one absolutely determined to walk away with the win and the Shield, after Portland squandered their opportunity to lock it up earlier in the day. They did exactly that, dominating the first half and quickly securing a three-goal lead.

One Key Moment: This opening goal was the perfect way to start the game for OL Reign and quickly set the tempo, making it clear that they were in charge. Jordyn Huitema was the one to draw the defenders and then find Megan Rapinoe wide open for the finish and goal in her 100th regular-season appearance.

Inside the Game: It took a little bit longer for the Reign to find their second goal but it came similarly to the first as Jordyn Huitema found herself running behind, this time onto a perfect ball from Quinn, and rounding the keeper to finish herself rather than passing it. off.

The third goal came not long after from Bethany Balcer when she brilliantly finished off the cross from Jess Fishlock. What was particularly special about these three goals for the Reign was that they were clinical finishes, something the Reign struggled with throughout the season that seems to have improved greatly in the last few games of the season. While they took 14 total shots, of their three on target, all were goals, while limiting Orlando to just five shots the entire match, completely a well-earned clean sheet.

The Skinny: Last-place Gotham FC broke its 12-match losing streak in a game of alternating goals against the first-place Portland Thorns on Saturday night. The match was a positive note on which Gotham could end its disappointing season, and the draw also prevented the Portland Thorns from claiming the shield title, as the race remained on until OL Reign’s 10 PM match on the same night.

One Key Moment: It wasn’t Gotham’s first or second but its third goal that earns the title of most significant. The goal itself, a solid header from McCall Zerboni, was remarkable not because of its artistry, but because of how it emblemized Gotham’s refusal to give up.

Inside the Game: Saturday night’s match against NJ/NY Gotham FC meant a lot to the Portland Thorns. Playoff contention was out of the question – the Thorns clinched a while ago – but a victory for Portland would bring them the coveted title of NWSL shield winners. Additionally, Golden Boot second-place holder Sophia Smith entered the match with 12 goals on the season, just three behind board leader Alex Morgan; surely, the idea of ​​capturing the award with a hat trick on Saturday night was on her mind.

To the surprise of, probably, everyone, however, it was Gotham who opened the scoring with a shot to the back left corner from Kawasumi. The Gotham goal – the team’s first in five games – was quickly followed by two goals in two minutes from Sophia Smith, the first of which came off a penalty kick, and the second from a skillful quick touch. Although Gotham started out impressively, by the half, it looked like the Thorns were on their way to capture the win, the shield, and maybe even the Golden Boot as a bonus.

A third Portland goal from Portland’s Morgan Weaver in the 53rd should have meant that the game was the Thorns’ to take home. Gotham, however, got on the board again in the 56th minute with a goal from Ifeoma Onomonu, and then once more in the 74th with a header from McCall Zerboni. While the game didn’t end in a win for Gotham, the results were something for the franchise to celebrate. As a team that has struggled and underperformed all season, Gotham’s three goals sent a message that this team is still tough, gritty, and not one to underestimate. And for Portland, the end of the match meant the beginning of the waiting game. The Thorns wouldn’t know if they were the NWSL shield-winners until midnight EST.

The Skinny: A steady match between the Washington Spirit and the Houston Dash ended in a 2-1 victory for the Dash, who are on their way to the NWSL playoffs for the first time in history and look prepared to go deep.

One Key Moment: It was an own-goal from Washington Spirit defender Julia Roddar that made all the difference on Saturday night, as a Houston header ricocheted off her chest and just barely crossed the line. The goal was especially satisfying to the Houston Dash, who seemed to be hitting the crossbar every two minutes of the second half.

Inside the Game: Entering Saturday night’s match, the stakes were somewhat low for both teams. The Washington Spirit, who were already eliminated from playoff contention, were hoping for a solid showing, while the Houston Dash, who recently clinched their first playoff berth in franchise history, needed a win to try and score a home game in the first round of the playoffs.

Houston’s vie for a win was visible early on, as midfielder Marisa Viggiano found the back of the net in the 14th minute. A few good chances by Houston’s Ebony Salmon and Washington’s Trinity Rodman in the following minutes looked dangerous but another goal didn’t come until the 36th minute, when a foul on Rodman turned into a successful penalty kick completed by Andi Sullivan. It didn’t take long for the game to move back into Dash’s favor. After a few agonizing near-misses with shots that ricocheted off the crossbar, the Houston Dash finally got their game-winning goal over the line in the 58th minute from an own goal by Roddar.

Ultimately, the Dash did exactly what they needed to do on Saturday night; while winning and picking up three points doesn’t instantly grant them a payoff, it means they are in the best shape they can possibly be in to control their playoff destiny. And if they look anything like they did tonight in the playoffs, the Dash could very well steer their destiny all the way to the final game.

The Skinny: After ninety minutes of not much action to write home about, a stoppage time goal from Louisville’s Jessica McDonald sent Racing home with a thrilling victory and interfered with the Kansas City Current’s plans of controlling their playoff destiny.

One Key Moment: Just when it looked like Kansas City would move smoothly into the playoffs after a Saturday night draw, McDonald’s 92nd minute stoppage time goal altered the Current’s fate and allowed Racing to finish their season on the highest of notes. Goals like this are the types of chaotic and unbelievable moments that define the NWSL.

Inside the Game: The first ninety minutes of Saturday night’s game between Racing Louisville and the Kansas City Current told one singular story – both sides looked formidable, and it would take a special shot to break through strong defensive walls and get on the board. The game was scoreless at halftime, with both sides essentially splitting possession but neither executing any deadly opportunities.

Although the pace of the game picked up in the second half, the same storyline continued to write itself out. Kansas City did suffer a setback when defender Desiree Scott earned her second yellow – upgraded to a red card, that meant Kansas City would both finish the game with ten players. and play their first playoff match without Scott. The Current, nevertheless, held on for the rest of regular time, fighting for a win that could have meant moving up to 2nd place in the table and hosting a playoff game.

The results the Current fought for, however, wouldn’t come to fruition. McDonald’s last minute goal means the Current will move down to 5th place in the table and will have to travel to Houston for their first playoff game. Kansas City has made an extremely impressive run in their second year as a franchise, but they fell just short of entering the playoffs in the most ideal conditions.