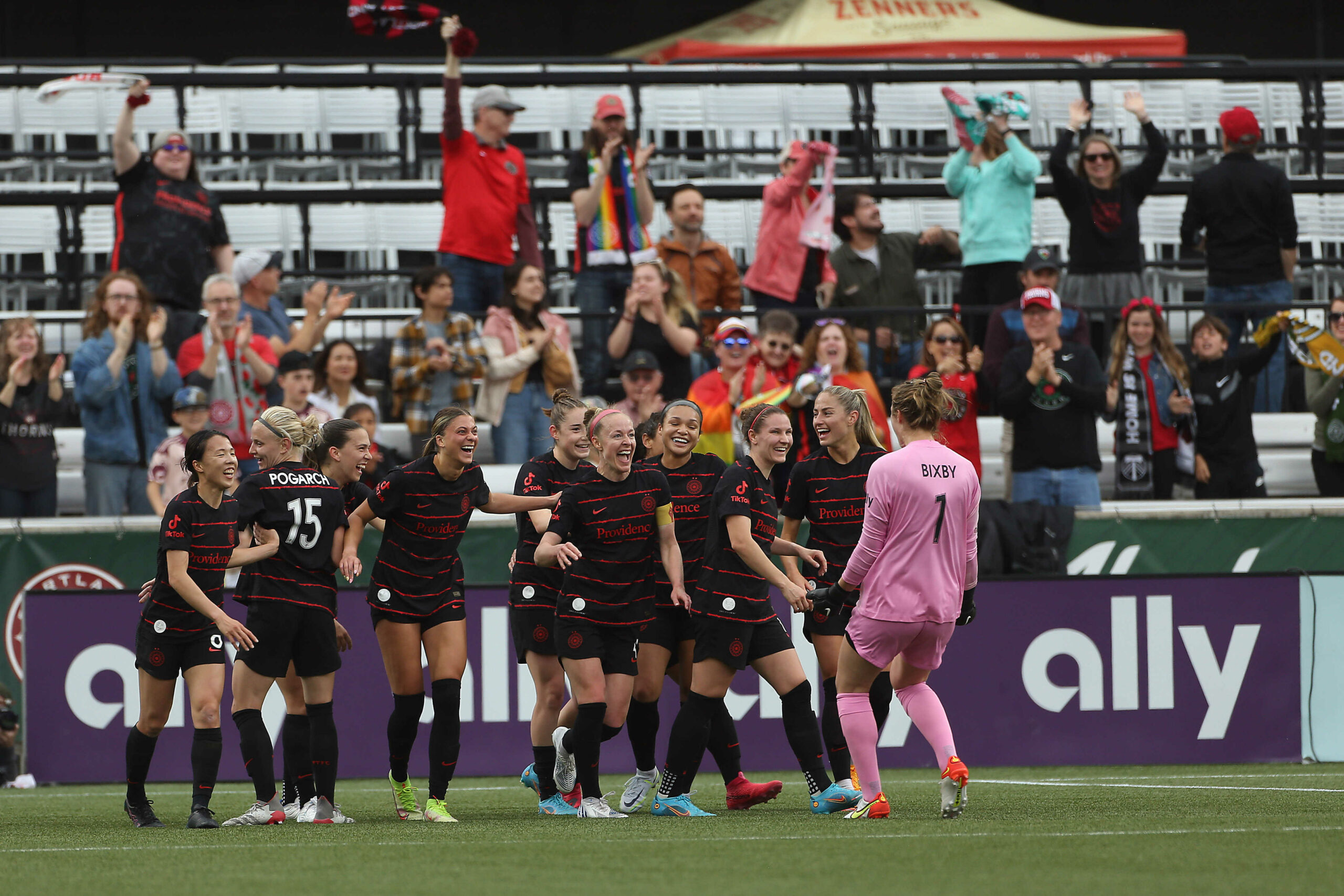 On Sunday, three games were played in the National Women’s Soccer Leaguekicking off with a domineering victory for the Thorns in Portland, followed by road wins from San Diego and Houston.

The Skinny: The Portland Thorns dominated this game in every sense of the word and every stat on the sheet. Six goals and a shutout, a complete and commanding victory.

One Key Moment: Natalia Kuikka’s goal is exemplary of how most of this game played out, with the Thorns constantly making quick passes and the Pride continuously too slow to get to them. Portland’s offense was on fire while Orlando’s defense was simply not good enough.

Inside the Game: Portland had essentially won this game in the first half. It took 20 minutes for the home side to find their opener but when they did it was a brilliantly taken finish by Hina Sugita on Janine Beckie’s cross.

The second goal came shortly after the first and was Portland’s only unassisted tally of the night but absolutely everyone loves a Becky Sauerbrunn goal. The US national team veteran converted the chance off the rebound for her first NWSL goal since September, 2019. The Thorns looked firmly in control at this point but the second half was when they truly took over.

The next star of the show was Sophia Smith and her brace on the night. As the second half began Portland turned up while Orlando did the opposite, allowing the Thorns to create many turnovers in the midfield from where they could launch the quick counterattack. Smith’s first goal, assisted by Sauerbrunn, came from one of these attacks where the Pride were not in proper defensive positions and the young striker made them pay with a smart and powerful strike to the opposite bottom corner.

With a little over ten minutes left, Natalia Kuikka would add the fourth goal. Smith would then score her second of the night with another brilliant finish off a counterattack, this time ripping it into the top corner.

And lastly, a special shoutout to this smart set-piece goal that put the cherry on top, but there is absolutely no reason for Taylor Porter to have that much space in the box. Two inexperienced players came on off the bench to connect here in Yazmeen Ryan and Porter, a good sign for the Thorns who will be missing many of their attackers to the upcoming international break.

The Skinny: Two goals and an assist by Alex Morgan lead the way on Sunday in the Wave’s 3-win win over Gotham on the road. Makenzy Doniak got the third for San Diego, her first for the expansion club.

One Key Moment: San Diego’s first goal showcased the connection between Taylor Kornieck and Morgan that has been on display this season. After winning the ball in a dangerous position off of Taryn Torres, Kornieck wasted no time in sending a perfectly weighted through ball between Gotham’s defenders to Morgan. She made no mistake in putting the ball through keeper Ashlyn Harris’ legs for the lead.

Inside the Game: Alex Morgan, take a bow!

Also claiming the second goal of the match – a quick flick after beating both Ali Krieger and Harris to a cross – the striker is having her strongest season of club football in her career, and her stats show it. Morgan now has 11 goals in just 10 games, besting her previous club scoring record today of nine goals that she set in 2017 with the Orlando Pride.

With superb service from Korneick and Jakobsson alike, Morgan shows no signs of slowing down. Sunday’s win moves the Wave back into first place in the standings.

Meanwhile, the scoring woes continue for Gotham. Frustratingly, Gotham did have a few good looks on goal, but got unlucky on the day. Most notably, just before Morgan’s second, Ifeoma Onumonu beat Kailen Sheridan with a shot, but it hit the inside of the post, crossed the goalmouth and stayed out.

Gotham sits in eighth place in the standings, and have scored just five goals in nine matches – the fewest in the league.

The Skinny: After an even-keeled start to the match, the faceoff between Houston and North Carolina featured an unthinkable five goals in 12 minutes, but Houston managed to hang on and take home a win on the road.

One Key Moment: With five goals between the 47th and 59th minutes, it’s hard to single out just one that shaped the match. But Debinha’s goal for North Carolina in the 59th minute (the fifth of the five) came just two minutes after her teammate Diana Ordoñez’s, and further fueled a rally that, although exciting, ultimately couldn’t steal back the lead.

Inside the Game: The North Carolina Courage, currently sitting in last place in the NWSL standings, were determined to use today’s match to turn things around. But Nichelle Prince and Sophie Schmidt both made the starting lineup for Houston after missing the Dash’s last match – a loss against the Portland Thorns – and their presence brought strength and confidence that the team from Texas has been missing.

Initially, the Courage rose to the challenge and got on the board first with a goal in the sixth minute from midfielder Denise O’Sullivan. The Dash responded in the 15th minute with a goal from María Sánchez, an unsurprising reply given the evenness of the match, and the game remained at 1-1 when the first half ended.

At the start of the second half, it only took Houston a matter of minutes to reassert themselves. A goal in the 47th minute from Elizabeth Eddy after a clunky sequence near the goal gave Houston an opening, and then another goal from Elizabeth Eddy – a high shot from the left side in the 50th minute – gave Houston a two-goal lead. And yet, the Dash weren’t done; Houston’s Nichelle Prince then added to North Carolina’s misery by finding the back of the net in the 51st minute. Just six minutes into the second half, the score had surged from 1-1 to 1-4.

North Carolina could have given up after that degrading four minutes; instead, the Courage’s Diana Ordoñez snuck the ball right through the legs of Dash keeper Jane Campbell to bring the score to 2-4, and her teammate Debinha followed suit with a goal in the 59th. Astonished fans waited to see if, like Houston, North Carolina could somehow also net three goals in four minutes, but de Oliveira’s goal ended up being the last of the match.

Around the 60th minute, the chaos mellowed and the match returned to the even-keeled pace viewers witnessed in the first half. The final 30 minutes were entertaining, but the dizzy onslaught of goals had faded away. With a final score of 4-3, Houston took home the win and ended its two-match shutout streak. Upon reflection, it’s hard to believe those 12 minutes really happened.