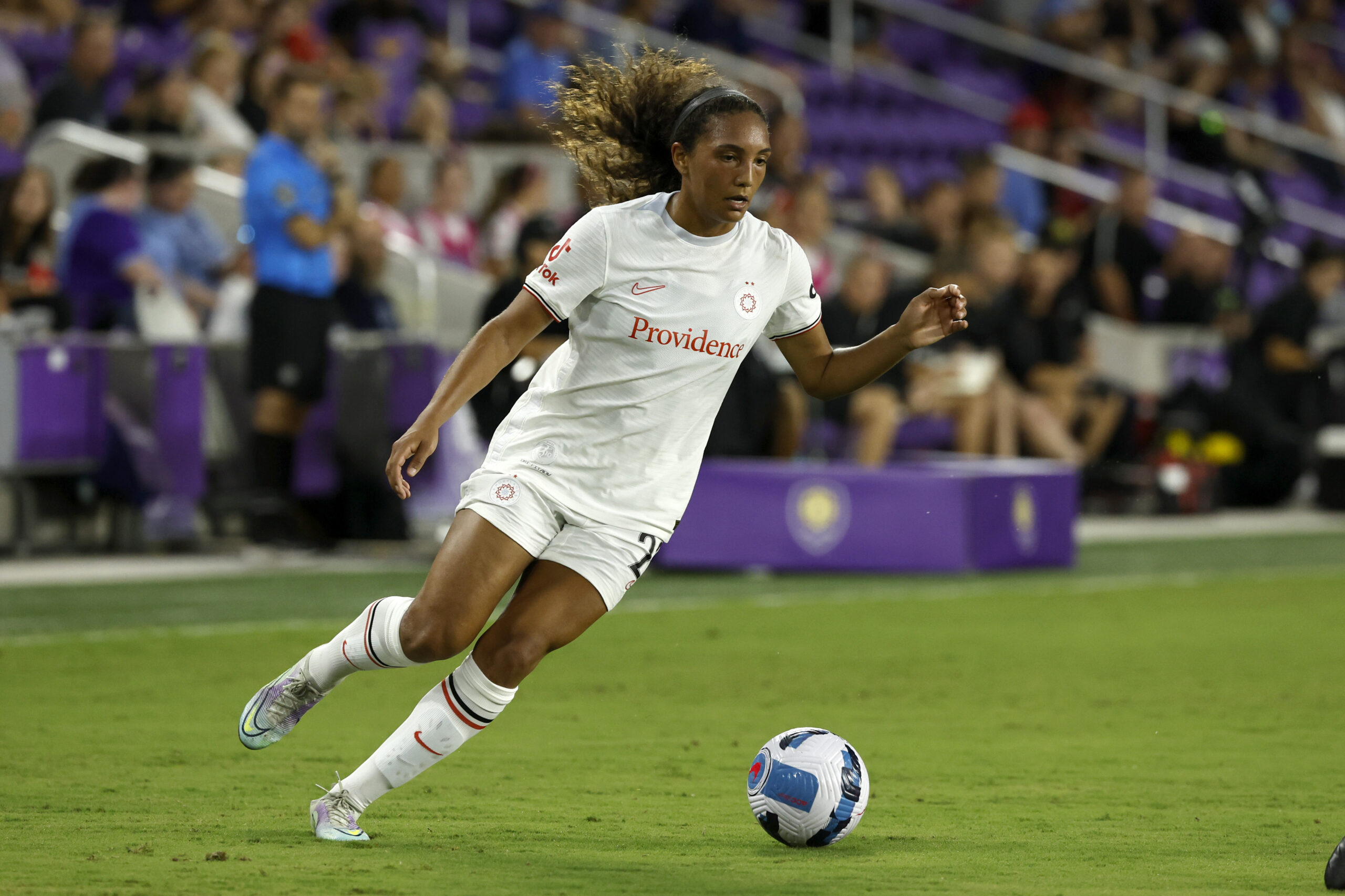 The Skinny: The Portland Thorns got back to winning ways on Friday night on the road in Orlando, with a 2-nil win over the Pride. Crystal Dunn returned to the field for her first action in nearly a year, after giving birth to her son less than four months ago.

One Key Moment: A beautiful team goal served as the winner for the Thorns. Meghan Klingenberg fed Morgan Weaver down the left flank, who delivered a driven cross to Yazmeen Ryan, who timed her run perfectly. Ryan was able to beat Pride defender Kylie Strom with a deft flick that found the back of the net.

Inside the Game: The Portland Thorns produced a complete performance on Friday night to move to the top of the NWSL standings. They now sit tied with San Diego on 31 points, but have a better goal differential (+19, to San Diego’s +11).

Dynamic play on the flank – particularly by Weaver – led to both of the Thorns’ goals. After assisting the first, Weaver led the charge on the insurance goal, as she made a great run from out wide into the penalty area. She was able to cut the ball back inside towards the penalty spot, where it eventually found Hina Sugita for the tidy finish.

Thorns captain Christine Sinclair and forward Janine Beckie did not feature in the match, as they just recently returned from a trip to Australia with the Canadian national team.

It was a tough night for the Pride, who were limited by the visitors to just one shot on goal. While the win snapped a two game losing streak for Portland, it consequently extended Orlando’s current losing streak to two, a tough result for a Pride side still outside of the playoff picture. With just four games remaining, Orlando is five points behind the playoff line.

The Skinny: It’s the same old story for OL Reign as they played a terrific match, they created the chances to win, but couldn’t finish enough of their chances to collect all three points, allowing Chicago back into the game. The Red Stars were able to take the lead in the second half but the Reign eventually found an equalizer, but no winner as their numerous chances were foiled by Alyssa Naeher’s spectacular performance in goal.

One Key Moment: The home side had two great chances to find a winner in the last minutes of stoppage time and it really sums up Reign’s struggle. The cross from Veronica Latsko finds Rose Lavelle’s head perfectly but the header hits the woodwork, maybe with a touch from Naeher, but it’s the third time they’d hit the woodwork in this match. Then it looked like the ball would fall kindly for Megan Rapinoe but she can’t get past Naeher either. Is it bad luck? Lack of finishing? Greatness from Naeher? Head coach Laura Harvey called this out post-match as Naeher’s best save of the night but said that at the same time her side needed to finish their chances. 21 shots, 9 on target, and an xG (expected goals) of 3.00, should’ve resulted in more goals, and it needs to if the Reign are to finally win the championship that has eluded them.

Inside the Game: It took a little time for the teams to settle in after the international break but OL Reign’s signature high press was effective early. They took 13 shots in the first half and both the players and coach said after that they should’ve put this game away in the first half. Once again lots of credit needs to be given to Alyssa Naeher for keeping her side in this game. She was beaten in the 18th minute by Jordyn Huitema for her first NWSL goal but not again in that half.

But only down by one goal, Chicago found their equalizer in first-half stoppage time thanks to a defensive disaster for the home side. After a rare mistake from goalkeeper Phallon Tullis-Joyce, the defense was very disorganized and couldn’t lock back in while Ella Stevens was everywhere winning the ball for the Red Stars and then scoring with a really well-placed ball in traffic.

So the teams come out of halftime tied and Chicago have all the momentum while having just subbed Mallory Pugh into the match. After only taking five shots in the entire first half the Red Stars started to take over, buoyed by Pugh’s movement between the lines. This increase in possession eventually led to a handball in the box and Danielle Colaprico converting the penalty kick.

Things got particularly interesting not long after as the goal energized the Seattleites and their chance creation started to return, resulting in a penalty call in their favor, but it was called back for offsides which is questionable looking at the replay.

Obviously, they play on and Reign are still looking for a second goal to tie things back up. Now, in the 80th minute, comes the magical left foot of Rose Lavelle with an unstoppable strike to the top corner.

The game finished with a flurry of chances for both sides but neither could find a winner. Reign will be disappointed with the tie while Chicago will be thankful Naeher is in their net and their spots remained unchanged in the standings for now.