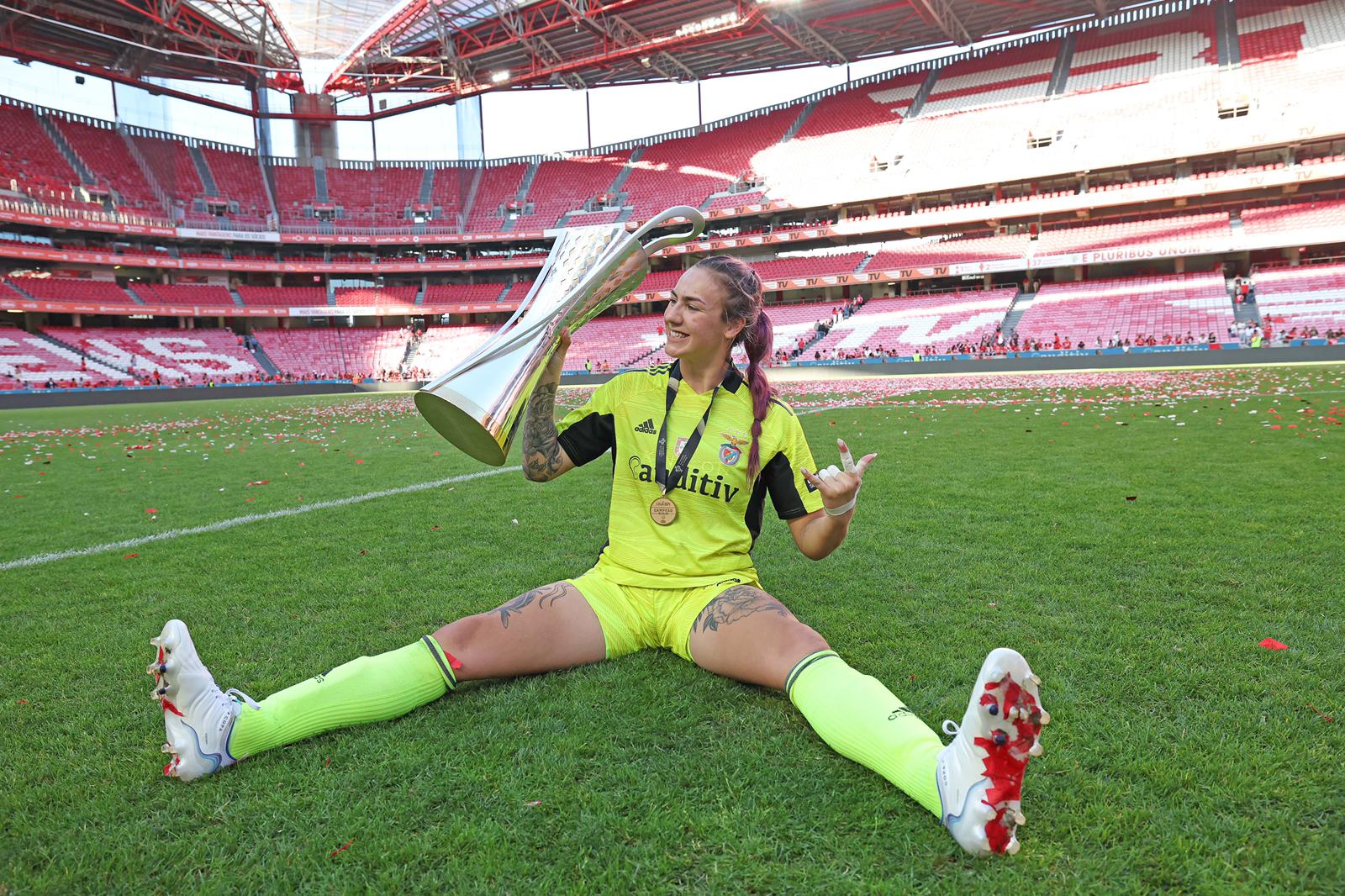 Growing up, Katelin Talbert’s dream of becoming a professional soccer player was too unlikely to be spoken aloud. Recently, however, it became a reality when Talbert signed her first professional contract with a team in a top division. Then came the success.

On Sunday, the 23-year-old played in front of a record crowd for a women’s competitive soccer match in Portugal. Over 14,000 people showed up to see reigning Portuguese champions Benfica defeat Lisbon rival Sporting CP to once again secure the Campeonato Nacional Feminino championship and qualification for the UEFA Women’s Champions League. Talbert made several important stops, highlighted by an amazing penalty save.

Talbert’s journey to get to Sunday featured a struggle that few ever saw or knew about. Battling the isolation brought on by the COVID-19 pandemic contributed to an extreme decline in her mental health. But Talbert went from an NCAA Division 2 school, and never having had a dedicated goalkeeper coach, to signing a multi-year deal with Benfica.

Out of high school, Talbert attended Humboldt State University, an in-state school that offered the California native a scholarship. There, she gained confidence in her game, facing a high number of shots but not necessarily playing the toughest opposition. Then came the COVID-19 pandemic in spring 2020, when everything shut down. Talbert planned to train with the team that fall before graduating, but that was taken from her, as it was from so many athletes. Gone, too, was her source of joy.

“I say that the one thing that keeps my mind off [my mental health issues] is playing soccer, ”Talbert said. Without that, she didn’t know her identity.

After those early months of the pandemic, Talbert was able to train once or twice a week with her WPSL team, the California Storm, but it was the least consistently she had ever trained. Talbert credits the Storm with keeping her playing after college but this huge change greatly affected her mental health. Because of this, she was not taking care of herself properly, she said, and she lost a significant amount of weight. She describes some of this journey in a since-deleted tweet that she shared with The Equalizer.

She posted that Tweet in spring 2021 after she was invited to OL Reign’s preseason camp. She had not been expecting any invites after entering the NWSL Draft as an unknown and going unselected. So, when the opportunity to follow her dream arrived, she says, she was not prepared.

“I would say that the reason that I was not physically or mentally ready for the Reign in Seattle was because 2020 is when I went through probably the lowest point in my life,” Talbert said. “My body was so weak and frail. As soon as I got that call I started feeding myself better… but I just didn’t have enough time to fully recover from that. ”

Despite not making the Reign roster, the team encouraged her to go overseas and get experience. Buoyed by the confidence instilled in her by her supportive preseason training-camp roommates, Talbert signed to play with a second-division team in Iceland. That led to a training opportunity with West Ham United in England where, for the first time, she worked with a full-time goalkeeper coach.

Training there gave her a new perspective. Talbert had always relied on her pure athleticism to make saves in the past, but in London, she learned to fine-tune her craft. However, under the new Brexit rules limiting internationals in the league, she was unable to sign for the club and had to look elsewhere. She ended up looking in Portugal.

Now, Talbert is the starting goalkeeper for Benfica. She trains in top-class facilities and works regularly with a goalkeeper coach. She just helped her club win the Portuguese top division. More importantly, she is loving life.

“I would say that now I’m in the best place mentally than I’ve probably been my whole life,” she said. “And I think one thing that’s helped me is the fact that I’ve been able to accomplish my dreams… And I would say now I have a lot more confidence than I probably ever have in my whole life.”

Unfortunately, at the same time, this has exposed Talbert to a significantly larger audience, which can bring harsh criticism. While she loves playing professionally, she still struggles with her mental health, which is especially affected by hateful comments on social media. The above Twitter post was deleted because of the comments it received after her notoriety grew. Now, her uncle and dad keep her updated on social media discourse because she is often too scared to look, she said. While she receives lots of positive messages that make her feel good – particularly in the wake of Sunday’s victory – the few nasty comments can override all of that love and support.

“It’s the only thing that can make you question if all this is worth it… because I go crazy in my head and it’s not good for me,” she said, adding that it is “the hardest part about being in entertainment.”

Talbert hopes that by sharing her experiences she can help others feel less alone and destigmatize the topic.

“I want to be a mental health advocate, because I have struggled my whole life with anxiety, depression, ADHD, a lot of stuff,” she said.

Talbert hopes that people will see that working through mental health issues is not a linear process, but one which needs to be consistently addressed. Her story, she hopes, shows that finding one’s self should not prevent someone from being a professional athlete.

“I have a lot more confidence than I probably ever have in my whole life,” she said. “Which is great, because I actually never thought that I would feel this good. I always thought it was impossible. ”