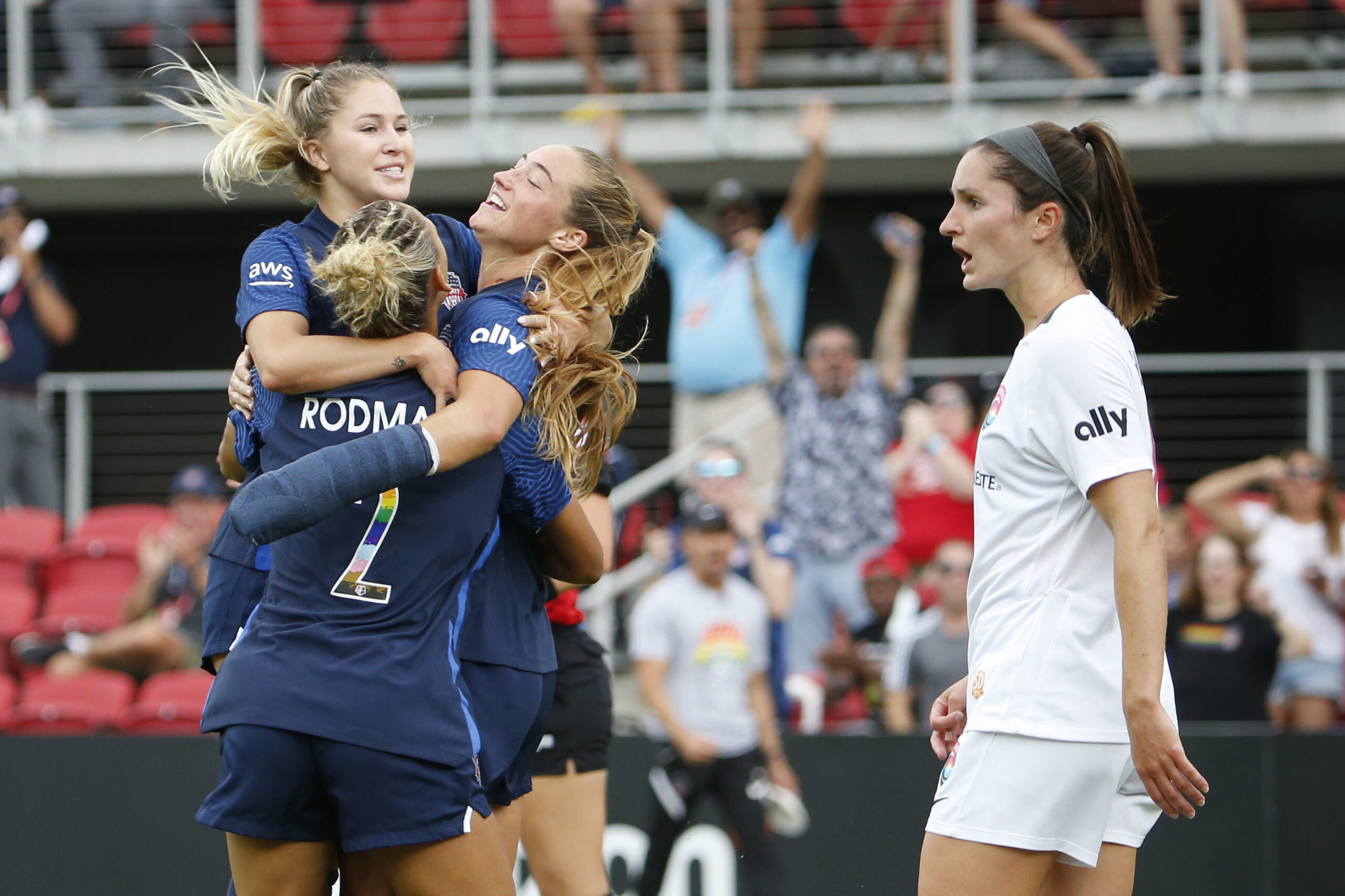 National Women’s Soccer League action kicked off on Saturday with the Washington Spirit earning a thrilling 4-3 victory over the San Diego Wave, with a game-winning penalty to seal the deal in the 90’+10′ minute.

The Skinny: The San Diego Wave dropped crucial points in the NWSL Shield race after a loss on the road to the reigning NWSL champions Washington Spirit, who now sit in 10th place and are looking to keep a late (but highly unlikely) playoff push alive.

One Key Moment: The Spirit’s second and third goals came from center back Amber Brooks, earning her first two goals of the season. It was the defender’s second goal that turned heads, scoring on a skilled header that she managed to maneuver, at a difficult angle, past Wave goalkeeper Kailen Sheridan. Watch it in slow motion just to see how hard the angle is for a set-piece play.

Inside the Game: No spot is saved or clinched in the NWSL for the playoffs right now, and San Diego has now dropped down to second place in the NWSL Shield race on a tiebreaker with Portland Thorns FC, who have a game in hand. San Diego wanted a win to get a cushion over the Thorns. Portland and San Diego are tied on points, but the Wave are behind Portland on goal differential.

And it’s not a slight goal differential, either. The Portland Thorns have a goal difference of plus-19, while the San Diego Wave have a plus-10 in the column.

This match got kicked off with a fast start. San Diego quickly got on the board in the 7th minute with 17-year-old Jaedyn Shaw scoring her second goal in as many games. The young attacker formerly trained with Washington before entering the league and being picked up by San Diego. However, Washington quickly equalized, four minutes later, courtesy of Tara McKeown.

Washington started to run away with it afterwards, with goals coming from an unlikely source. Brooks’ first goal of the season came off a toe-poke goal against veteran goalkeeper Sheridan after a poor clearance in the box from Madison Pogarch landed right at Brooks, who formerly played for clubs like Houston and OL Reign. Right before the half ended, Brooks gave Washington a cushion with her immaculate header off a corner kick.

However, San Diego began to mount a comeback, with a penalty kick converted by Alex Morgan. The US women’s national team striker earned the penalty after Brooks committed a foul inside the box. Brooks was given a yellow card and, due to yellow card accumulation, will miss the next match against Gotham on Sept. 17.

Morgan scored the equalizing goal, too, with a header off a corner kick. According to CBS announcer Jenn Hildreth on the broadcast, Washington has now given up eight goals after the 80th minute mark this season (and five in the 90th minute or later).

However, that wasn’t the final goal of the match. Ashley Hatch stepped up to the penalty spot after McKeown was awarded a penalty after a foul from Emily van Egmond. Hatch converted past Sheridan and Washington, despite giving up a late goal, earned three valuable points. The goal was Morgan’s 15th of the regular season, a career-high and four ahead of the field in the Golden Boot race.

The Skinny: A thorough performance on Saturday night gave the North Carolina Courage their fourth win in five games. Carolin and Debinha each put two goals past Racing Louisville en route to the win, while Carolin also recorded two assists.

One Key Moment: The Courage scored early and often on Saturday, and their best was a combination play between their two Brazilians for the third goal. It was a lovely give and go, including a great run and finish by Debinha.

Inside the Game: Although Nadia Nadim was able to pull a goal back midway through the second half for Louisville, it was the Caroline show from start to finish on a rainy night in Cary. The rookie notched her second brace in back-to-back appearances.

For Racing, the defending just wasn’t good enough on the day. A ball over the top of the defense to Caroline for the first, and a misplaced clearance on the second made things too easy for the Courage to start, and put Louisville in an early hole. Louisville’s two shots on goal through 90 minutes were no match for North Carolina’s twelve.

With the win, the Courage move to 8th place, and are five points behind the Red Stars who currently occupy the last playoff spot (although the Courage have a game in hand). Racing Louisville were officially eliminated from playoff contention tonight with the loss.